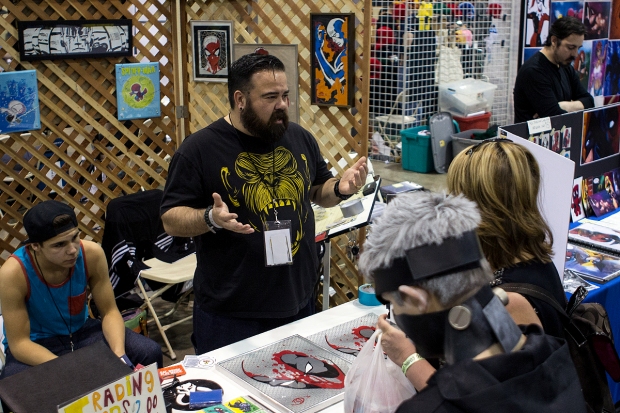 Micah Garcia pitches his duct tape artwork to convention attendee as his son, Christian, sits next to him at Amazing Arizona Comic Con in Phoenix, Arizona on February 14. AACC was Garcia’s first convention as an exhibitor. 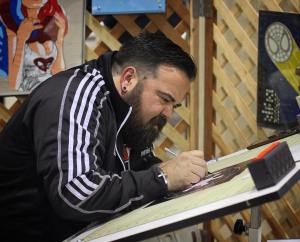 Michah Garcia working on his duct tape art at Amazing Arizona Comic Con in Phoenix, Arizona on February 12. AACC was Garcia’s first convention as an exhibitor.

“It’s all duct tape,” a voice calls out as groups of people pass by The Stuck Duck’s booth in Artist Alley at Amazing Arizona Comic Con in Phoenix, Arizona.

The voice belongs to one of Micah Garcia’s sons, who is pointing out a piece of Deadpool artwork that sits on the table for people to pick up and touch.

Garcia is usually seen working on pieces of art at his booth, while his sons help him attract the attention of attendees who are walking through the hall.

AACC, which was held from February 12-14, was Garcia’s first show as an exhibitor. Being from Chandler, Arizona, Garcia thought the local convention would be a good fit for his first show.

“I’ve only been doing duct tape art for less than a year now,” Garcia said. “I actually saw Ducky D, who is another vendor who is here this year, at the Phoenix Comicon and I was really inspired by his duct tape and I thought ‘hey man, I can do this.’

“I went home and I bought some 99 cent duct tape and some 99 cent cheap blades and got my wife’s glass cutting board from the kitchen, and got a picture that I got sketched of Spider-Man at Phoenix Comicon and blew it up and went for my first one … after I got finished with it I said ‘I love this.’”

Daryl, who goes by the name Ducky D, said he was happy to have Garcia at the show.

“It’s really exciting to have someone else here who I’ve inspired because now we can actually work off each other’s ideas and stuff like that,” Ducky D said. “It helps me become a better duct tape artist as well.”

Ducky D said that he likes the style that Garcia that bases his art on.

“His work is really good,” Ducky D said. “He’s come a long way from when he first started until now, and I think he’s going to continue to do really good in this area.”

When it comes to his style, Garcia’s work is based on classic comic book style characters.

“One of my favorite artists to do is Jack Kirby,” Garcia said. “His Silver Surfer, his Iron Man you see here, they give themselves to duct tape. His artwork is amazing … cutting the lines and all of the little weird details and shadowing and shading just really makes it pop off the duct tape.”

In a testament to how well the classic comic book art lends itself to duct tape, people can’t tell at first glance that Garcia’s art is made of duct tape.

“I like the challenge of actually making the duct tape look like a piece of printed ink by using transparent duct tape on top of my colors and doing things like that to make them look more like the comic book,” Garcia said.

Alec Black, of Gilbert, Arizona, was fooled at first glance

“I thought it was actual paint,” Black said.

Garcia said he had mixed, but mostly positive, feedback overall.

“It’s really cool,” Black said. “He has so much dedication to art that he can just sit down and do this.”

Rather than making sales, Garcia went in to the convention just to get his work out for the first time. Garcia said he wants to work up to Phoenix Comicon, but really enjoyed AACC.

“I always want more people to check out the duct tape,” Garcia said. “Selling the duct tape would be great too, getting it into people’s houses. It’s just been awesome, working with the other exhibitors and having them appreciate your work too, since I’m brand new here.”

To learn more about Amazing Arizona Comic Con, check out their website at http://www.amazingarizonacomiccon.com/

Copyright © 2021 Create a free website or blog at WordPress.com.